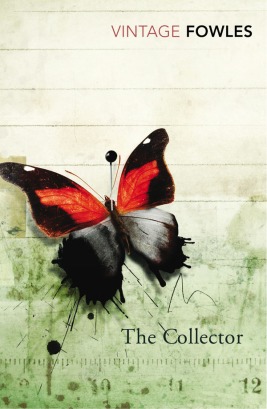 Withdrawn, uneducated and unloved, Frederick collects butterflies and takes photographs. He is obsessed with a beautiful stranger, the art student Miranda. When he wins the pools he buys a remote Sussex house and calmly abducts Miranda, believing she will grow to love him in time. Alone and desperate, Miranda must struggle to overcome her own prejudices and contempt if she is understand her captor, and so gain her freedom.

According to the fountain of all dubious knowledge AKA Wikipedia, this book has been claimed by some serial killers, kidnappers and other delightful people to be the inspiration for their crimes.

Which I did not know before reading the book, but which makes perfect sense to me, in the way that the male MC continues to justify and explain away his actions to make them seem perfectly understandable and reasonable, even though he’s kidnapped a girl and kept her locked up in a cellar because he loves her.

This tale is almost told on two levels – one, the actual kidnapping of Miranda and her ordeal in the cellar, and on a second level, a discussion of class difference that takes place between them, whereby Miranda comes across as pretentious and the kidnapper, Frederick, becomes a sympathetic character.

Despite Miranda’s character failings, this is obviously no justification for ABDUCTING HER AND KEEPING HER LOCKED UP IN A CELLAR. Frederick is utterly creepy in his calm, rational manner, and the book ends on a highly disturbing note. A compulsively readable thriller.

Ethan Allen Hawley, the protagonist of Steinbeck’s last novel, works as a clerk in a grocery store that his family once owned. With Ethan no longer a member of Long Island’s aristocratic class, his wife is restless, and his teenage children are hungry for the tantalizing material comforts he cannot provide. Then one day, in a moment of moral crisis, Ethan decides to take a holiday from his own scrupulous standards.

Set in Steinbeck’s contemporary 1960 America, the novel explores the tenuous line between private and public honesty that today ranks it alongside his most acclaimed works of penetrating insight into the American condition.

A darkly humorous and fairly depressing look at the failure of the American dream and the ill-fated pursuit of money. A witty and cutting narrator leads us through his daily drama as the town grocery clerk, and the doings of the well established families in town. While on the surface Ethan, our MC, is a fairly uncomplicated creature, we discover just what he’s willing to do in order to live up to the family name and the pressure placed on him by family, neighbours and society as a whole. Cynical, war-scarred and introspective, Ethan is a character you can’t help but root for even with his misdeeds and ruthlessness.

On an unrelated note, Ethan conducting a daily morning sermon to the groceries on the shelves is hilarious.

Some quotes that really stood out for me:

I guess we’re all, or most of us, wards of that nineteenth century science which denied existence to anything it could not measure or explain. The things we couldn’t explain went right on but surely not with our blessing. We did not see what we couldn’t explain, and meanwhile a great part of the world we abandoned to children, insane people, fools and mystics who were more interested in what is than in why it is.

To be alive at all is to have scars.

And if small crimes could be condoned by the self, then why not a quick, harsh, brave one? Is murder by slow, steady pressure any less murder than a quick and merciful knife thrust?