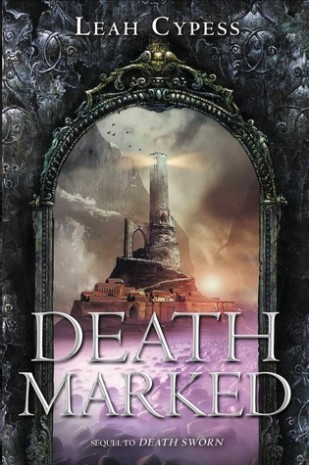 A young sorceress’s entire life has been shaped to destroy the empire controlling her world. But if everything she knows is a lie, will she even want to fulfill her destiny? The sequel to Death Sworn is just as full of magic and surprising revelations, and will thrill fans of Leigh Bardugo and Robin LaFevers.

At seventeen, Ileni lost her magical power and was exiled to the hidden caves of the assassins. She never thought she would survive long. But she discovered she was always meant to end up, powerless, in the caves as part of an elder sorcerer’s plan to destroy the evil Empire they’d battled so long. Except that Ileni is not an assassin, and she doesn’t want to be a weapon. And, after everything, she’s not even sure she knows the truth. Now, at the very heart of the Empire—its academy for sorcerers—the truth is what she seeks. What she finds challenges every belief she holds dear—and it threatens her fledgling romance with the young master of assassins.

This book had an unexpected ending, and while that may have initially disappointed me, upon closer reflection, I thought it was really refreshing – it’s good to be surprised, and not have everything go the way your shipper heart desires. I think it’s much more realistic, and healthy, to take into account vital character flaws in a person, and fundamentally differing belief systems. That’s all I’ll say on that account, however, because I’m trying to keep this review as vague as possible to avoid spoilers.

In Death Marked, the final book in the Death Sworn duology, we find out more about the magical world that Ileni inherits, building on the questions left unanswered in the first instalment.

The reader is introduced to some new characters, all with differing motives, and we meet up with some old favourites (and not-so-favourites.)

Ileni as a protagonist is admirable – she is reluctant to act on passion, and would rather find out more before making a decision she is likely to regret. No matter her past actions, killing does not come easily to her.

Her skin tingled with embarrassment. Was nothing she knew about the world true? And if so, how could she – ignorant, naive, wrong about everything – possibly make a decision that would affect the world so drastically?

In her new surroundings, Ileni is uncomfortable, unsure of her mission and place in life.

But she didn’t want to be interesting. Interesting meant that she was different, that she didn’t fit anywhere, that she couldn’t be part of anything. That there were parts of her that didn’t fit together, that rubbed against each other jaggedly, that hurt.

She wanted to be like everyone else. For a moment she didn’t even care which everyone. Whether in the Academy or the caves, or even back among her own people, she wanted to be whole again, to be moving in the same direction as the people around her, filled with certainty and surrounded by agreement. To be part of a tide, instead of a sinking straggler who had no idea which way she wanted to go, much less how to get there.

I very much enjoyed how the author makes us question the nature of right and wrong, the grey area between the two, of crowd mentality, of dangerous knowledge.

But those dreams were gone, and she could never get them back, When she had believed she could learn the truth and make her own choices, she hadn’t realised that truths could not be unlearned, that knowledge would rob her of choices as well.

One thing that did stand out to be was the use of the words like ‘puke’ and ‘um’ in the novel. Which seemed out of place in our supposedly historic era.

But apart from that singular gripe, this was a wonderful fantasy read, and a satisfying introspection on the nature of destruction.

ARC received from Edelweiss in exchange for an honest review. Quotes are taken from an uncorrected proof and may change in the final edition.